The Untold Truth Of Josephine Skriver 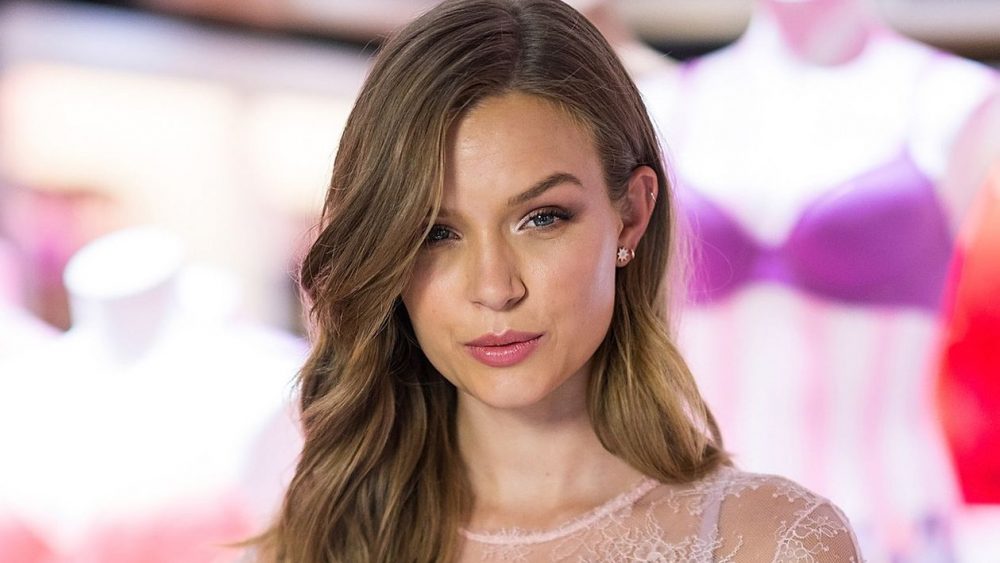 When you look at Josephine Skriver, you might be tempted to think that she is just another gorgeous model. However, Skriver is much more than that. She has a unique upbringing, and she a human rights and equality activist.

Skriver is among the growing list of celebrities that are using their fame to raise awareness about issues such as LGBTQ rights. Skriver is not a member of the LGBTQ community, but the community is close to her heart, and she works towards its prosperity. This is the untold truth of Josephine Skriver.

She was born via IVF 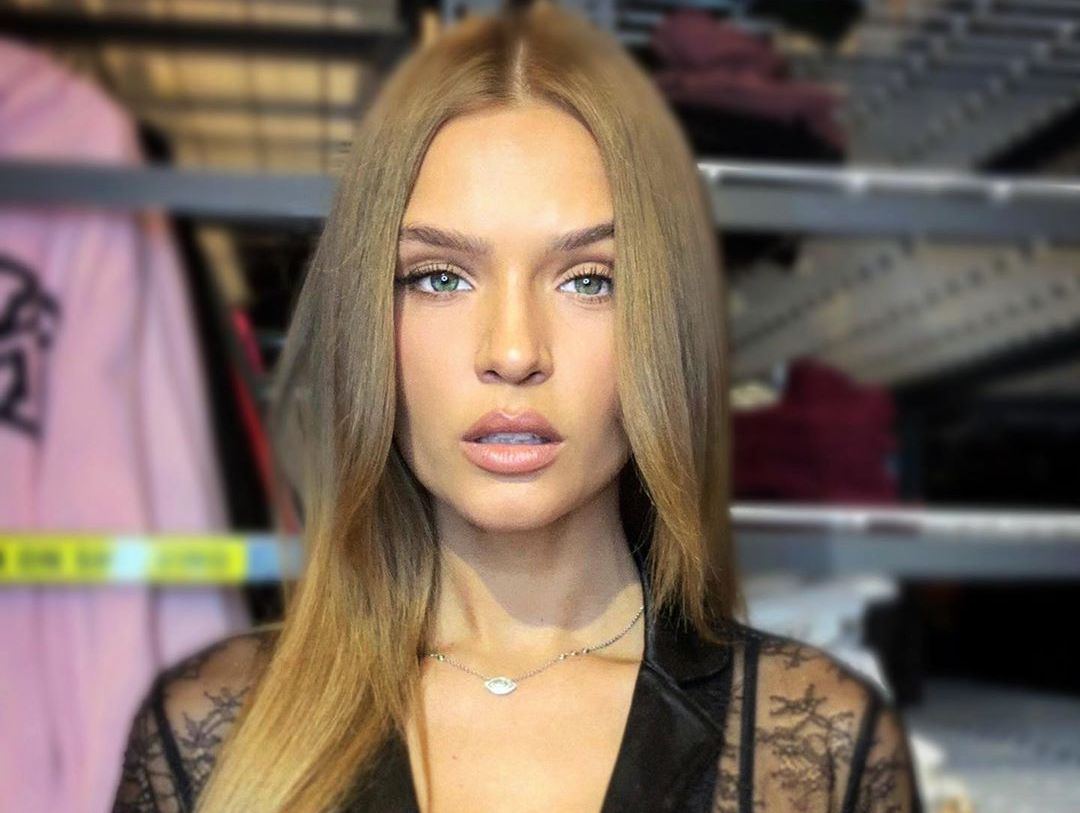 Skriver was born on 14th April 1993 in Copenhagen, Denmark. Her dad is a marine biologist, and her mom is an IT analyst. Skriver and her brother, Oliver, were conceived via IVF. Skriver’s mom and dad are all members of the LGBTQ community. Her parents are both gay.

Skriver’s conception began in 1992 when her mom posted an ad on a LGBTQ community newsletter saying;

“I want to bring a child into this world, does anyone want to be a part of that?”

Her mom was gay, but she wanted to be a mom, and so she asked members of the LGBTQ community to help her out. She got a few replies on her ad, and she picked the first one. The first responder ended up being Skriver’s dad. At that time, Skriver’s dad was just about to get married to his husband.

Skriver’s parents were very open about her method of conception, and they all contributed to raising her. Skriver told i-D;

“I didn’t like the term ‘step mom’ or ‘step dad’ because it always felt like something bad from the Disney movies. So we came up with our own term and called it ‘Bonus Mom’.

She is bullied because of her conception 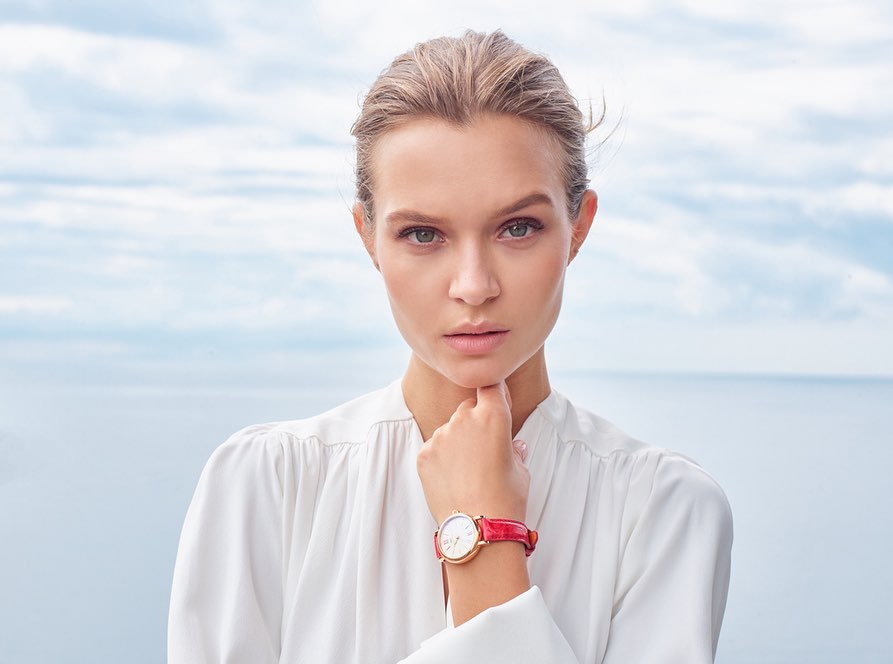 As a child, Skriver’s parents didn’t mind being open about her mode of conception. Skriver didn’t feel any different from the other kids. However, some of the kids thought that she was weird. Skriver was strong and proud of her identity, and she didn’t allow the negativity to affect her.

However, the negative comments and the hate grew when she became a model. She quickly realized that the world isn’t as accepting as her community in Denmark. She revealed in the interview with i-D;

“On social media, its gets really hard with the hate. It’s the one place people can say whatever they want without consequences. You get so many comments like ‘that’s disgusting,’ ‘that’s gross’, ‘I feel bad for you’ and what’s hard about social media is that I can’t really talk back.”

Despite the hate, Skriver tries to spread the message of love and acceptance. She told i-D;

“For me, the fundamental part of every childhood should be love, and my parents had so much to give.”

Skriver is proud of her upbringing, and she regularly posts her family on social media. On 10th May 2015, she posted an Instagram photo, featuring herself, her mom and her brother, with the caption;

“Grateful to call this amazing woman our mom. You inspire us every day to be the best people we can. No heart has more love and acceptance than yours. Thank you for everything.”

She is an advocate for LGBTQ rights 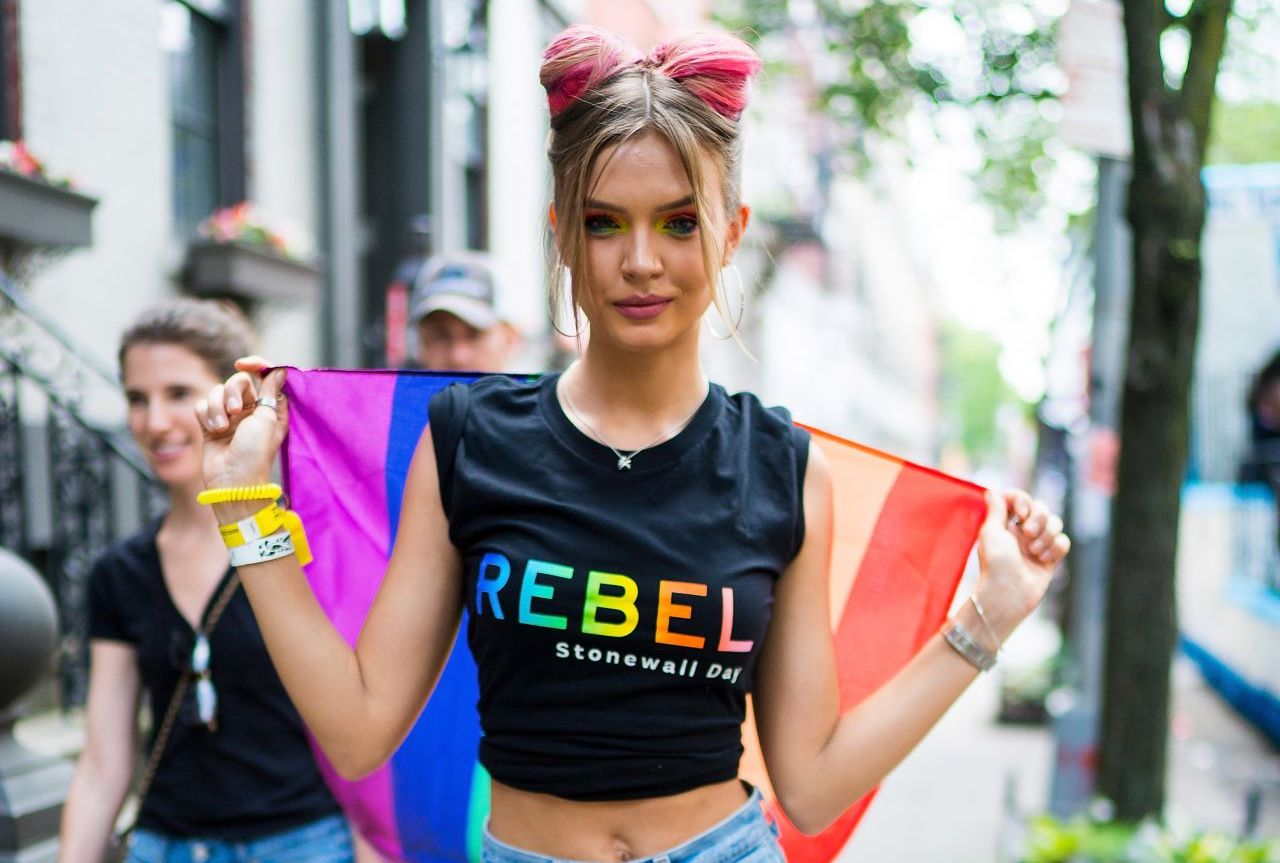 Skriver grew up in an LGBTQ family. She doesn’t feel any different from growing up in such a family. According to Skriver, all that matters to her was the love that she got from her parents. She told i-D that she grew up in a loving family;

“I didn’t really know my life was any different, because I had parents that loved my brother and I very, very much; parents who sacrificed, loved fought, and taught us about life like any other parents would…For me, family is a group of people bound by love! Love is what makes a family!”

Skriver felt compelled to become an LGBTQ activist when she got exposed to the hate that the LGBTQ community receives outside of Denmark. She told i-D;

“But I think growing up in a country like Denmark has shielded me from a lot of hate that still exists in other parts of the world. I have only recently started to understand that extent of it.”

She decided to use her fame to spread the message of love and acceptance for the LGBTQ community. Skriver speaks about LGBTQ rights whenever she can. In 2015, she became a celebrity ambassador for the Family Equality Council. She specifically works with the council’s Outspoken Generation Program, which seeks to spread awareness about LGBTQ.

She was discovered when she was 15 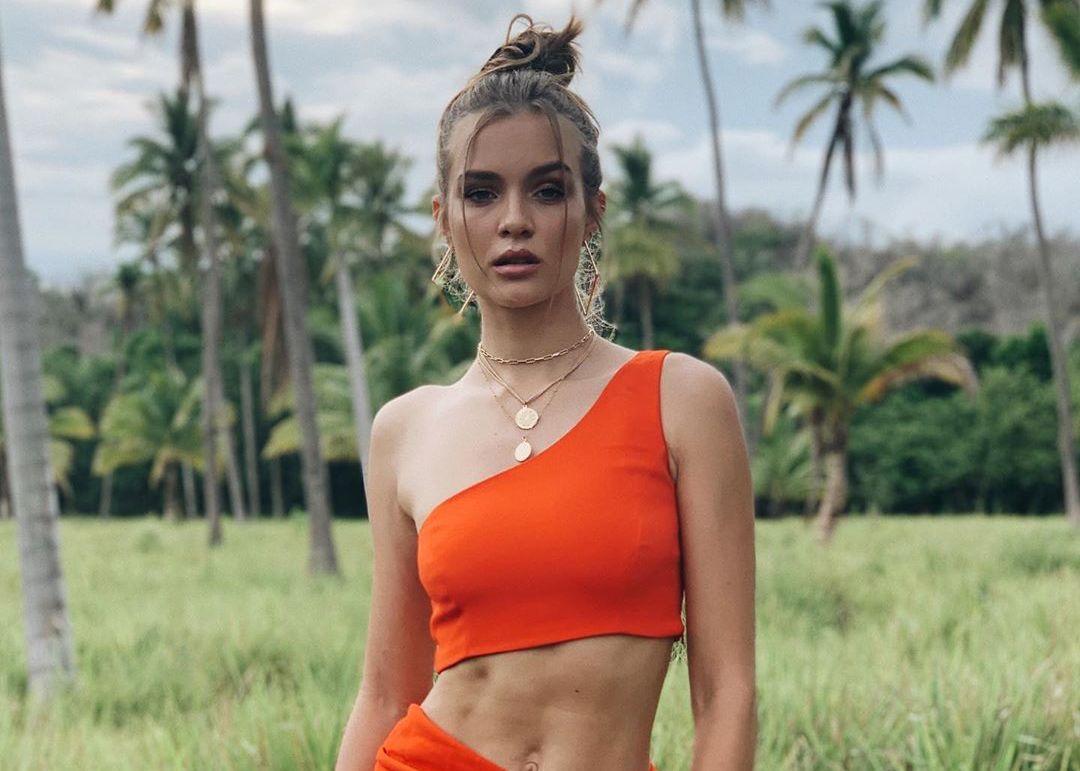 Skriver’s career as a model began when she was a little child. She appeared on a few ads about diapers. However, she didn’t actively pursue a modeling career when she got older.

At the age of 15, while on a trip to New York with her soccer team, someone pointed out that she had modeling potential. Skriver then signed a modeling deal with Unique Models in Denmark. She received other offers from outside Denmark, but she rejected them in favor of staying in Denmark to finish her studies.

She began pursuing her modeling career when she finished school in 2011. She debuted in 2011 when she modeled for Alberta Ferretti. She has gone on to model for other top designers such as Yves Saint Laurent Beauty, Michael Kors, Armani Exchange, Dior, Andrew Marc, and more.

She is a Victoria’s Secret Angel

“Josephine Skriver is a stunning young woman and a delightful person. She is so special and we are enormously happy to welcome her to the most exclusive club in the history of modeling, The Victoria’s Secret Angels.”

Skriver was ecstatic about becoming a Victoria’s Secret Angel. She posted the following message on Instagram;

“So overwhelmed with every happy emotion right now! I don’t even know how to be in my own body! It still feels so insane the day is finally here! Thank you so much to the incredible the team of @victoriasecret…Thank you for making me part of the VS Family!!! Flying on happiness right now!!!!!”

She is engaged to singer Alexander DeLeon

Skriver started her relationship with Alexander in 2013. Alexander is the lead singer for the band Bohnes. The couple looks to be in a strong and loving relationship. Alexander proposed to Skriver in November 2018.

Alex took advantage of this romantic moment to go down on one knee. He asked Skriver to marry him, and she said yes. It was such a great day for the couple. That same day, Alex and his band released the song, Aurora Borealis, which is a song about Josephine.

Josephine posted an emotional message about Alex on Instagram;

“I have never been more sure about anything in my life…My soulmate. My best friend. The love of my life. Sometimes in life you will meet this one person that makes everything make sense. A person that pushes you to be an even greater version of yourself. A person that makes you not just dream it…but believe it.”

Alex and Josephine look to be very much in love. The couple’s social media pages are full of adorable photos and captions of them appreciating each other. On 6th July, Alex posted a photo of Skriver with the caption;

“This isn’t our anniversary. It’s not a holiday. We aren’t together today. There’s no reason for this post other than sheer appreciation. I took this picture and I am still in awe that you chose me. I am living a lucid dream with you…you are a rarity. I appreciate you now and forever. I don’t need a special day to know or remember that.”

She is a great cook 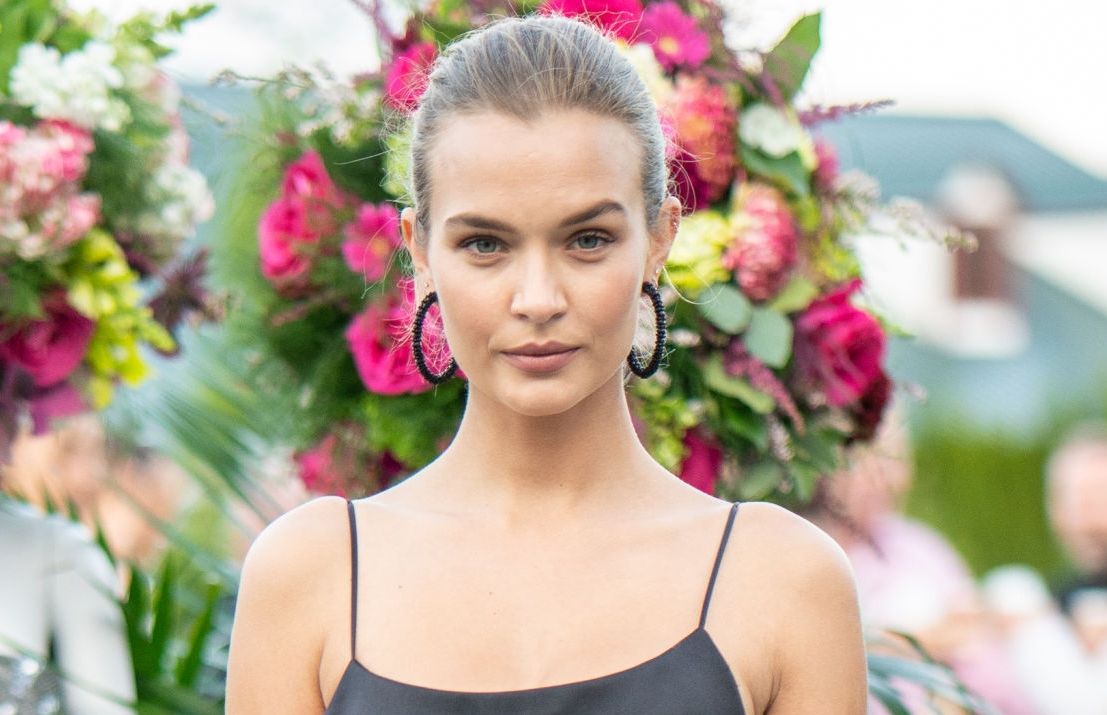 Every model has a secret as to how they stay in shape. However, Skriver doesn’t have a secret. She told AOL that she doesn’t believe in any special diets;

“I don’t really believe in diets. I think it’s all about keeping things healthy. I love protein, I am a big meat eater, so anything that’s like, you know, whatever works for you, just keep it in moderation.”

Skriver also loves cooking her own food. Skriver told Elle that cooking is her greatest obsession. She said that Food Network and other cooking competitions give her the motivation to cook. She has been experimenting with a few dishes, and she admits that sometimes, it doesn’t go well;

“I love being in the kitchen and experiment with all types of dishes…I’m no Master Chef, of course, and it does go really wrong at times. But I love doing it, and practicing only makes perfect.”

Her efforts have been noticed by her family, and she is now the cook when the family gets together.