The Untold Truth Of Kaia Gerber 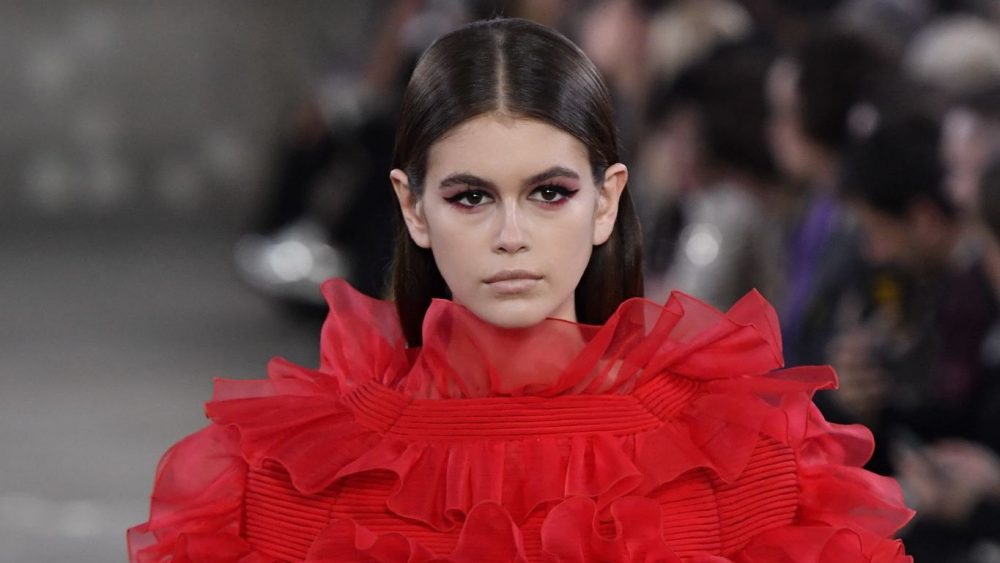 Kaia Gerber is one of the most recognizable faces in the world right now. She is quickly becoming one of the world’s top models.

Her face is on magazines and beauty products all around the world. She is quite young, but she has a lot going on in her life. Keep reading to find out more about Kaia Gerber.

She comes from a superstar family

Kaia was born on 3rd September 2001 to Rande Gerber and Cindy Crawford. She grew up alongside her older brother, Presley Gerber.

Her father is a famous businessman but, he started out as a model. He modeled while studying at the University of Arizona, but afterward, he swapped modeling for business.

Cindy Crawford is one of the world’s most famous supermodels. Her most successful spell in modeling was in the 1980s and 1990s when she made multiple appearances in magazines such as Vogue, Elle, and Cosmopolitan. Cindy quit being a full-time model in 2000 but, she still makes appearances on various magazines.

Presley Gerber is a model and, he is mainly based in Europe.

She is a famous model 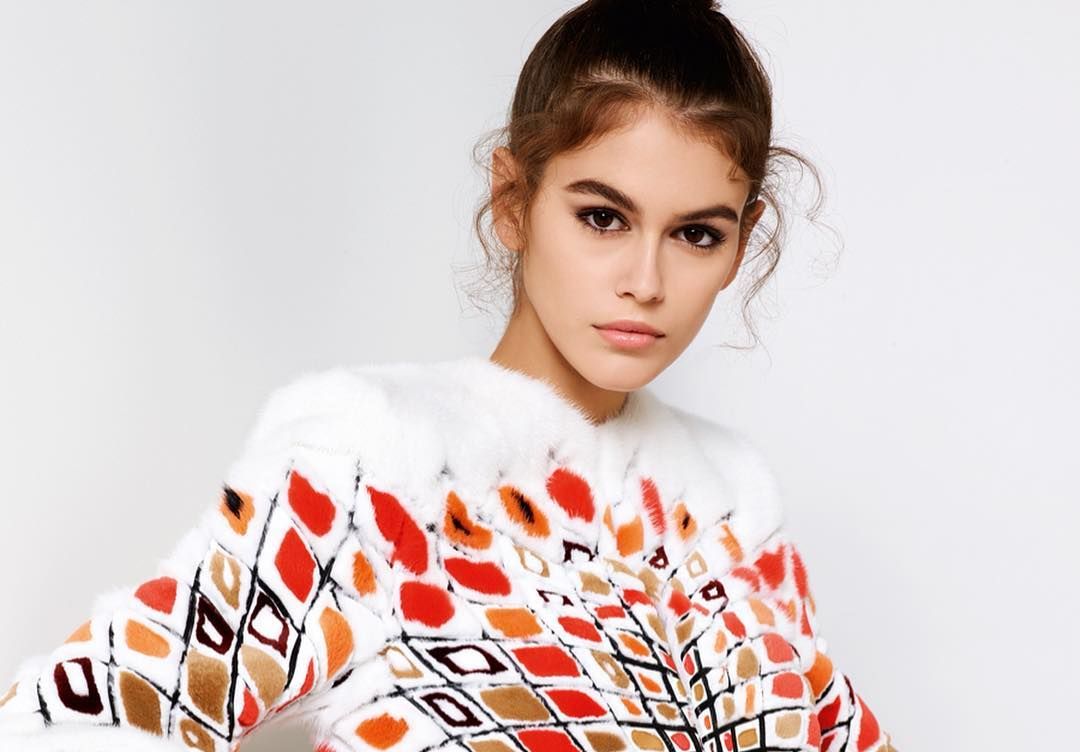 It was written in the stars that Cindy Crawford’s daughter would follow in her mother’s footsteps. Kaia inherited her mother’s gorgeous looks. She is a carbon copy of her mom during her prime modeling days. Kaia also has the body of a supermodel.

Kaia’s modeling career started when she was only 10. According to Marie Claire, Cindy accompanied Kaia to her first shoot with Versace Kids. Cindy was impressed with Kaia’s natural talent and, she said;

“Being on-set with my daughter, watching her in front of the camera was a fantastic experience. I’m so proud of her.”

Kaia’s career took off from there and, she signed with IMG models when she was 13. She then went on to model for magazines such as Teen Vogue and Pop Magazine. Kaia made her runway debut in 2017 for Calvin Klein. She has also modeled for Mark Jacobs, Alexander Wang, Chanel, Fendi, and many more. Kaia won the Model of the Year award at the 2018 Fashion Awards.

Kaia is one of the top models in the world right now. However, she told Marie Claire that she doesn’t think she is a supermodel yet;

“When people refer to me as a supermodel, I think, ‘Give me a little time, at least!’”

Karlie Kloss was her modeling inspiration

Kaia revealed to Marie Claire that her mother never gave her a catwalk lesson. She kept her work life and her home life separate;

“She’s so down to earth – that supermodel version of Cindy Crawford wasn’t my mom – she did a really good job of separating her work and home life, and I admire her for that.”

It meant that Kaia had to look to other places for modeling inspiration. She found that inspiration in Karlie Kloss. Kaia revealed to Marie Claire;

“I have always looked up to Karlie Kloss. She started out even younger than my mom, and when I started out she always had the best advice for me.”

“She’s broken all the rules of what a model should be and uses her platform to benefit others. Plus we’ve met a bunch of times, and she’s one of the nicest people ever. All my icons I look up to as people, not just their work.”

Another person who she looks up to is Naomi Campbell. Naomi and Cindy Crawford were in the modeling industry at around the same time and, they became friends. They are still friends and, Naomi is pretty close to Kaia’s family.

Naomi is very fond of Kaia and, she guided her through her first weeks as a model.

Her first word was chocolate

When Kaia was young, her mother loved feeding her with chocolate bites. Kaia loved the bites so much that her first word was chocolate.

Kaia still loves chocolate to this day. She also loves pasta, and it was the first meal that she learned to make.

Kaia’s brother is her most favorite person 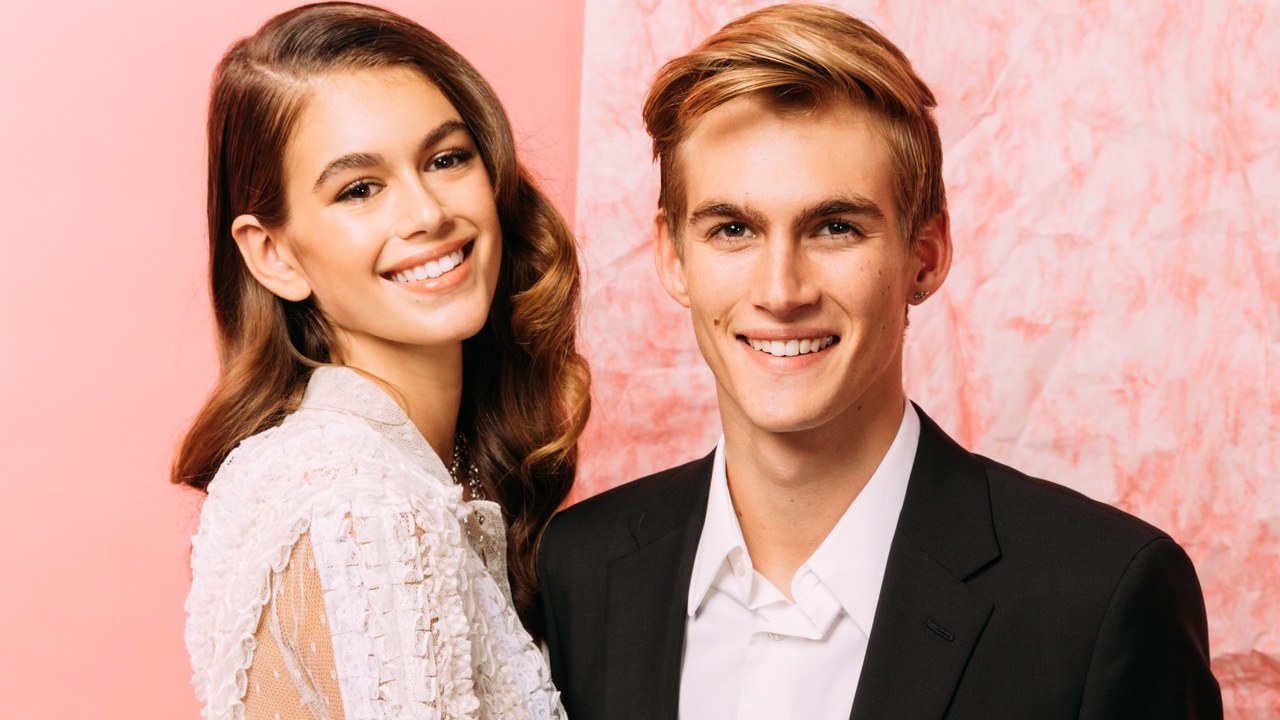 Kaia once stated that if she could go to outer space and take only one thing, it would be her brother. The two of them have enjoyed a close relationship over the years and, they remain close.

Presley is a model and Kaia loves his fashion sense. Kaia told Elle that she loves stealing his stylish sweatshirts;

“He’ll say, ‘Kaia, have you seen my stuff?’ And I’m like, ‘Nope, guess you just left it somewhere.’ Then I’ll literally be wearing it the next day, and I’m really bad at covering for myself. I’ll be like, ‘What are you talking about? This is mine!” And then I can’t stop laughing.”

Presley is doing well as a model, but he didn’t want to pursue modeling when he was young. He wanted to go to college and start his own business. However, he decided to try out modeling during his senior year in high school and, he never looked back.

She has a thing for music 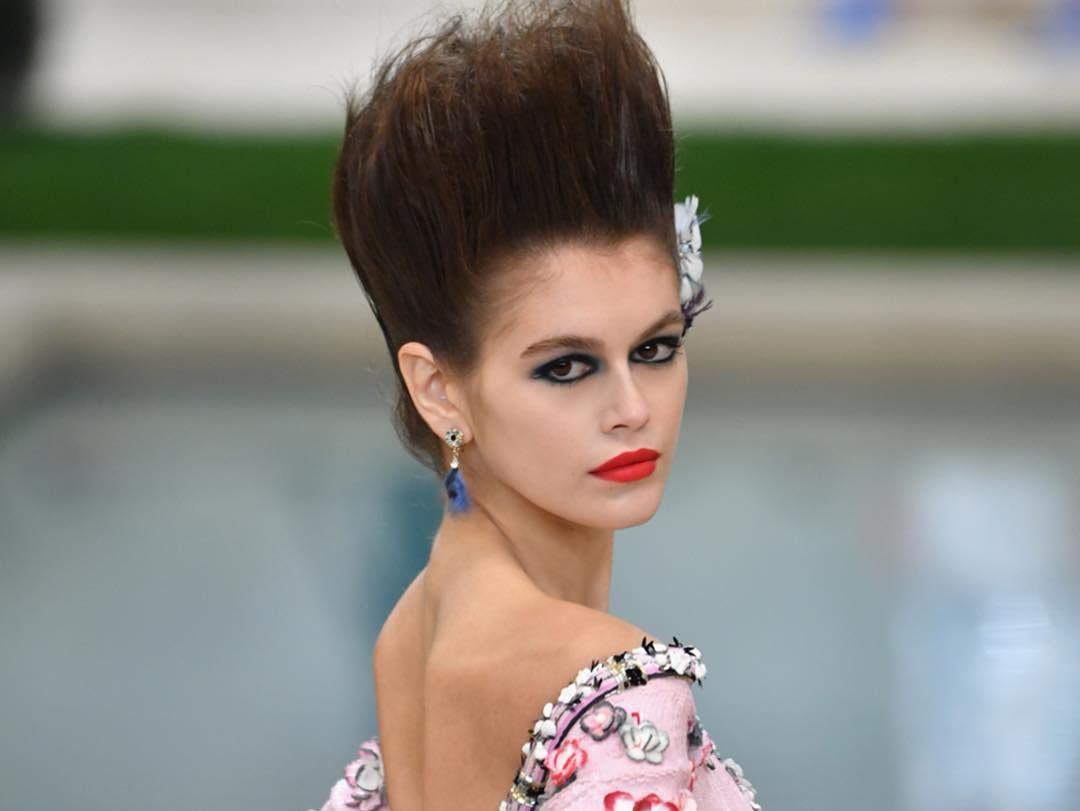 Kaia is a talented model, but she also has a thing for music. It’s easy to understand why, given that she has friends such as Taylor Swift and Harry Styles.

Kaia told L’Officiel Singapore that she played the flute while growing up. There are also photos and videos on her Instagram page showing Kaia playing the guitar and, she is pretty good at it. She also made an appearance on stage with a group of friends as they performed at the Malibu Chili Cook-Off’s Carnival.

She clearly has a love for music, but she told Elle that she is terrified of karaoke;

She might not have a great voice, but she does well with instruments. Kaia has a lot of years ahead of her, and she might venture into music at some point.

She is close friends with Harry Styles

Harry Styles is a fan favorite, especially with the ladies. The former One Direction singer enjoys a close relationship with Kaia and her family.

Kaia admitted that she nearly suffered a heart attack when she first met Harry. She didn’t say whether she had a crush on him, but Harry had a profound effect on her. Kaia is now close friends with Harry.

Harry enjoys spending time with Kaia and her family. He made a great impression on Kaia’s family and, he is often spotted on family outings and events. Harry has also spent time with the family at their favorite vacation home in Ontario, Canada.

It isn’t something that she shares with a lot of teenagers but, Kaia takes school seriously. At the moment, she is not enrolled in college, but she made an effort to complete her high school studies. She told Teen Vogue that if she enrolls into college, it will be to study psychology.

Kaia modeling career took off while she was at Malibu High School. The hectic modeling schedule made it difficult for her to focus on school, but she never gave up. She worked hard and, she graduated from the school’s online program.

She is in a low-key relationship with Wellington Grant 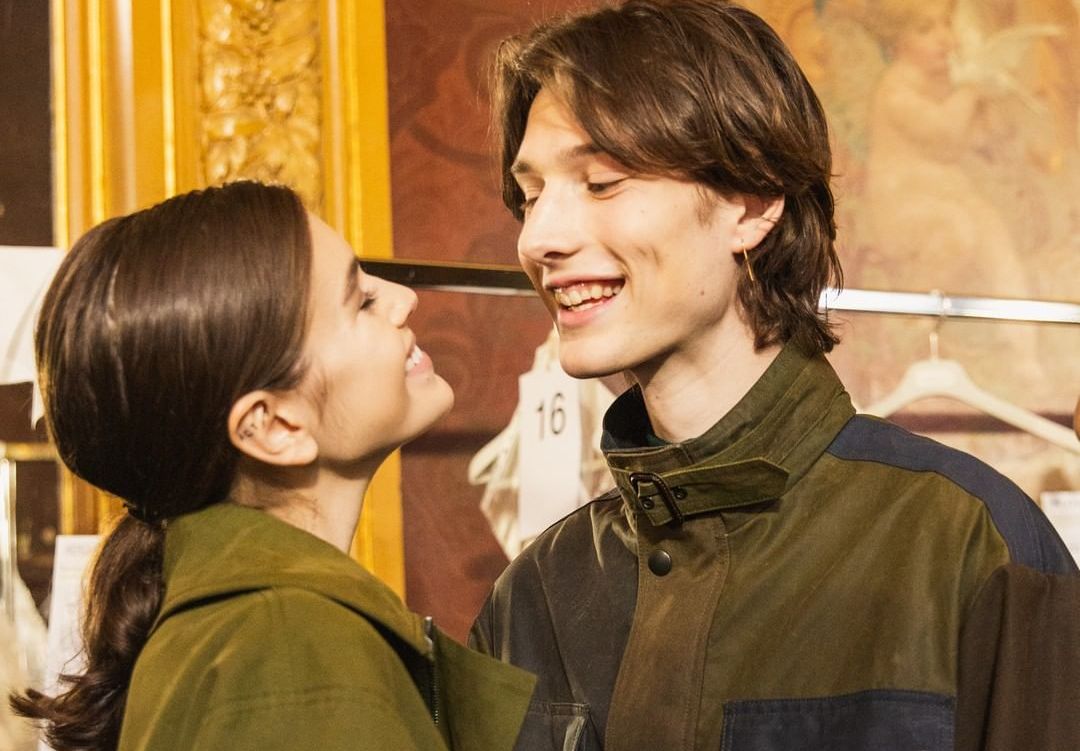 Kaia can catch the attention of any man all around the world. However, it looks like Kaia has found her perfect man in Wellington Grant. Wellington is also a model.

The couple has been spotted out and about on a few occasions. Fashion designer Stella McCartney seemed to confirm the relationship on an Instagram photo of the couple posted on 9th March 2019 with the caption;

“Feeling the love with @KaiaGerber and @WelllsFargo backstage at the Winter 2019 Runway Show in Paris. Dedicated to the ones we love in the past, present and future.” 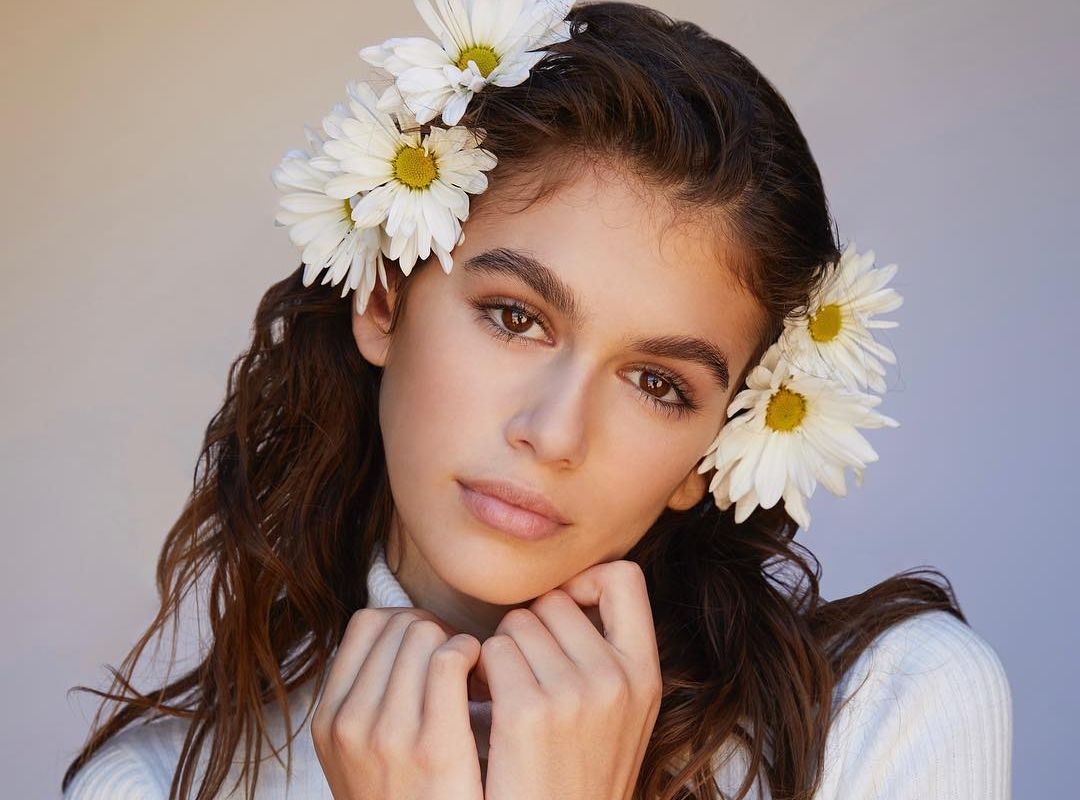 Social media has become a great way for models to reach out to their fans. Most models have a large number of social media followers, and Kaia isn’t an exception.

She has 4.4 million followers on Instagram, and that number is set to continue growing. Kaia told Marie Claire that she loves how she can express herself on the app;

“Instagram is the closest I can get to being who I really am – it’s easy to get caught up in social media but I don’t let it dictate how I live my life.”

The best way to take a break from social media is to find a place where there is no network coverage. For Kaia and her family, this place is Muskoka, Canada. The family goes on vacation at a cottage near Lake Joseph and, it allows the family to relax and bond.

More importantly, the cottage has no Wi-Fi coverage. It provides Kaia with a much-needed break from social media. Kaia told Teen Vogue;

“As my brother and I get older and busier, I really cherish the time we spend together. Every summer we go to our house in Canada; it’s our tradition. It’s on the lake, and we go for four or five weeks. There’s no Wi-Fi, so I stay off social media.”